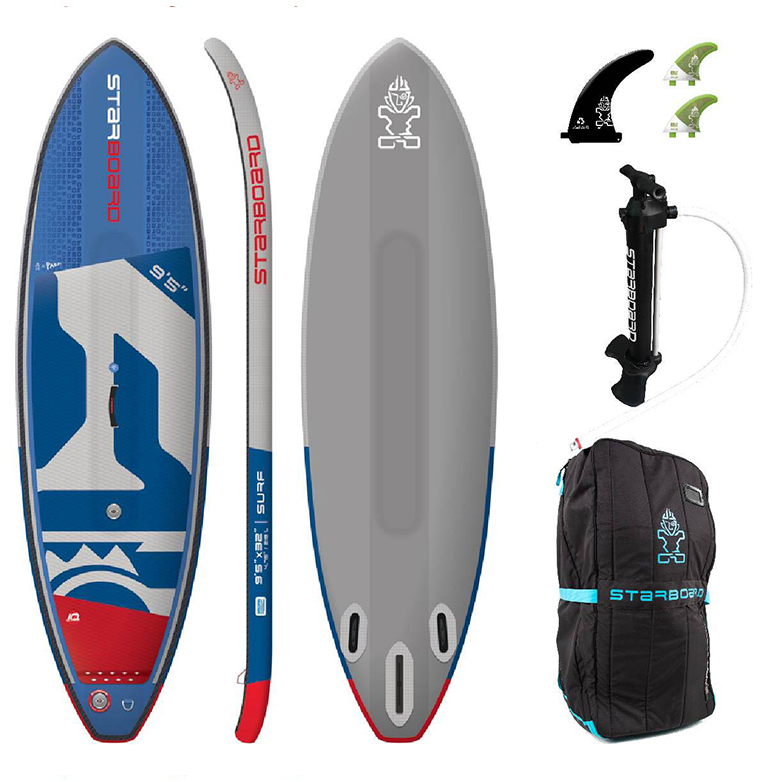 Well, if you know anything about the Starboard brand, it should come as no surprise that their engineers have been hard at work coming up with that very solution and we now have the Starboard Surf Inflatable. As the name implies, this is an iSUP that was specially designed for surfing. This was done based in the size, shape and general design of the board. While all this sounds fine and dandy, our job is to find out if it actually works out and is it worth your hard earned dollars.

Surfing and paddleboarding have always had an interesting relationship. Both involve going on the water on a board, but the goals and techniques are very different despite having some factors in common. What if — and just hear us out here — you could find a way to combine the 2 sports using one board?

Since this is an iSUP that designed to work as a surfboard, we have to look at this from 2 different angles since these are 2 generally different activities. As a paddleboard, it leaves a bit to be desired. For instance, 9’6” is very short for an adult board and even though it has a respectable width of 32”, the board comes in at a thin 4.75”. If you’re looking to paddle around all day, you’ll find this to be a workout to keep you stabilized and you may have problems keeping up your speed as a result. However, the maneuverability of this board is probably the best you can expect from an iSUP. 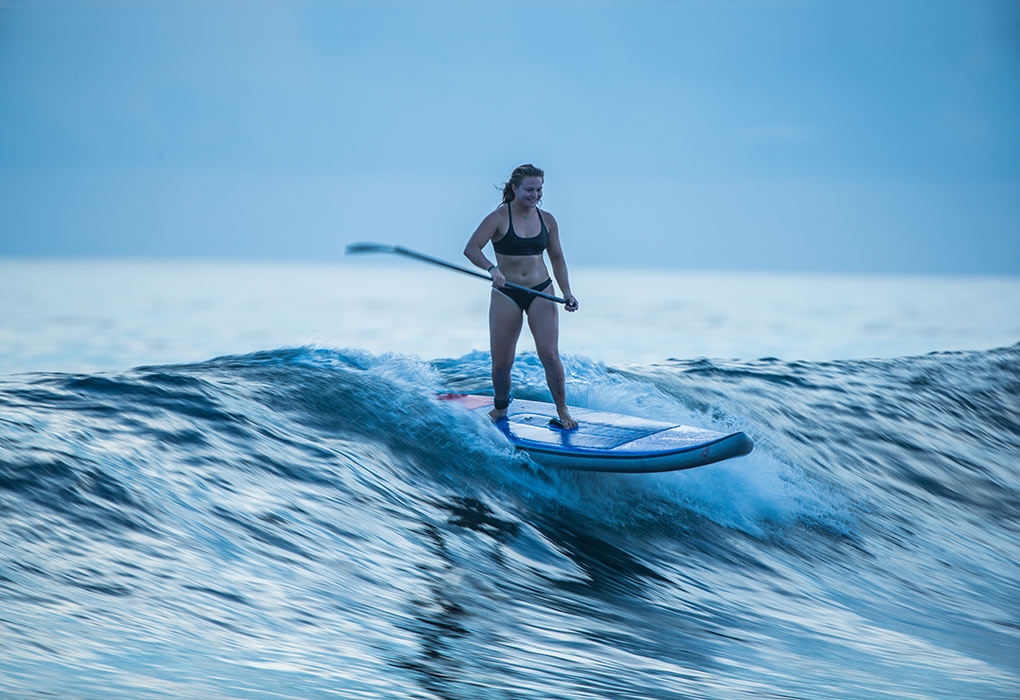 As a surfboard, we can say that while it’s not the best we’ve ever used, it’s mostly likely the best inflatable we’ve ever used. Remember, you can still do some surfing on most inflatables, but move with the same speed and control as this one while on a wave. The board is thin but doesn’t wobble when hanging over a crest. One of our favorite features is that you can stand up and paddle out to the waves instead of having to lay down on the board like most traditional surfboards.

To be honest, this is a pretty barebones model compared to its sister boards when it comes to features, though everything it does include is designed for surfing. For instance, the deck padding, while comfortable enough, is more focused on being nonslip than comfortable, for obvious reasons. Speaking of nonslip, a feature that we adore here is the tail kick pad. It’s true that some other Starboard boards have this feature, but it is probably best served on the Surf Inflatable since you’ll often find yourself wanting to angle your board with the nose up — and generally not wanting to fall off the back while doing that.

One feature that seems a little odd is only having a grab handle on the center of the board and nowhere else. We’re used to seeing at least 1 or more on the nose or tail. We’ll give this a pass for 2 reasons. First, it’s such a small board that you really don’t need a second handle. Second, this is truly more a surfboard than SUP, so it shouldn’t be held to the same standard as other SUPS.

Unlike most other Starboard iSUPS, there is currently no option for the size or design of the Surf other than the standard. It’s got the standard white and blue with a splash of red thrown in for good measure that we see from the other standard Starboard boards.

What really stands out here is the actual design of the board itself. For instance, both the nose and tail are lifted to give it better control on the waves. Also, the Surf sports a 3-fin setup that gives you extra speed yet decent tracking. The side fins (thrusters) are located right on the sides of the board, giving the center fin maximum protection from drag while also adding to the maneuverability of the board at higher speeds.

Starboard says that that the Surf Inflatable was directly based off of their composite Wide Point model, and we can easily see where they were trying their best to put features that are normally on hardboards to this inflatable.

While Starboard generally give a choice of 1 of 4 construction options, the Surf Inflatable only has one available — the Deluxe Double Chamber. Essentially, it contains 2 chamber inflation areas on the inside for the maximum stability that a board like this can offer. In addition, reinforced rails are put on that side that use a heat process on their seams versus the traditional glue in addition to drop stitching.

Because of the double chambers, you can expect a bit more time when it comes to inflating the board as there are 2 separate areas to inflate instead of the traditional single. Honestly, while it’s a bit more work, it worth it since this iSUP is solid.

Out of the box, you get a square-shaped backpack (since the board is folded), removable center fin, ankle leash and tiki air pump. As a side note, the air pump is made from recycled fishing nets and the newest version is 10% more efficient than the previous model. 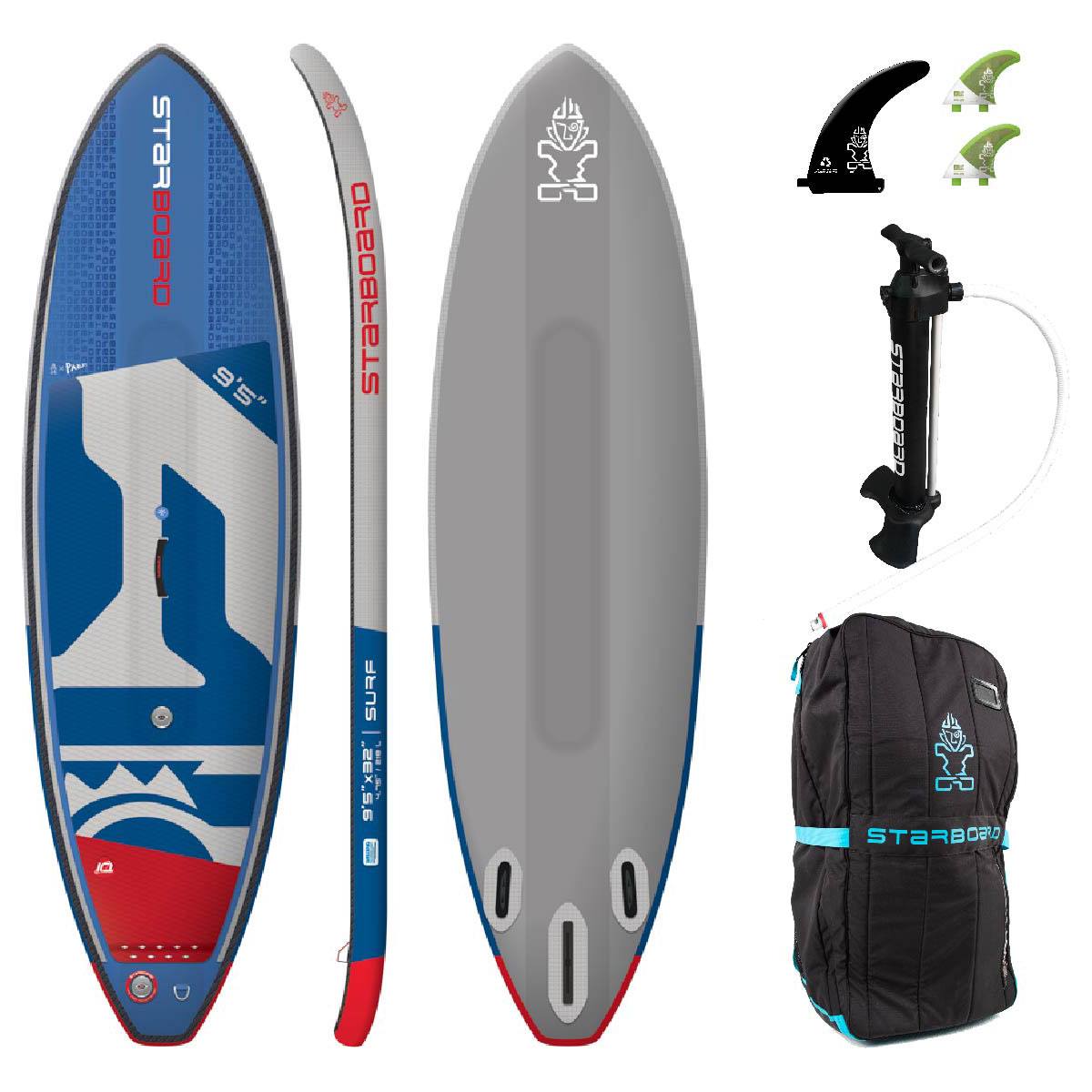 As an iSUP, we don’t really care for it all that much. It’s short, not particularly comfortable and difficult to stabilize for long periods of time. But we know that this wasn’t designed as an iSUP per se. With that in mind, it’s probably the best surfing iSUP that comes to mind. In fact, it’s better than a lot of dedicated surfboards we’ve seen before when it comes to actually surfing.
We know we mention this with most of the Starboard iSUPs, but the paddle not coming with the board rubs us the wrong way. Even though this is a surfing iSUP, it still assumes that you’ll be using a paddle at some point and considering the price, there’s no reason not to include something.
Keep in mind that the real reason to get this board is convenience. If you’re just looking for a surfboard, you can get one that does the job better than this for less money. But if you have limited space and don’t feel like lugging around a full 10’ board around with you, this would be one of the better options you could ask for.

CLICK HERE TO GET YOUR VERY OWN STARBOARD SURF INFLATABLE