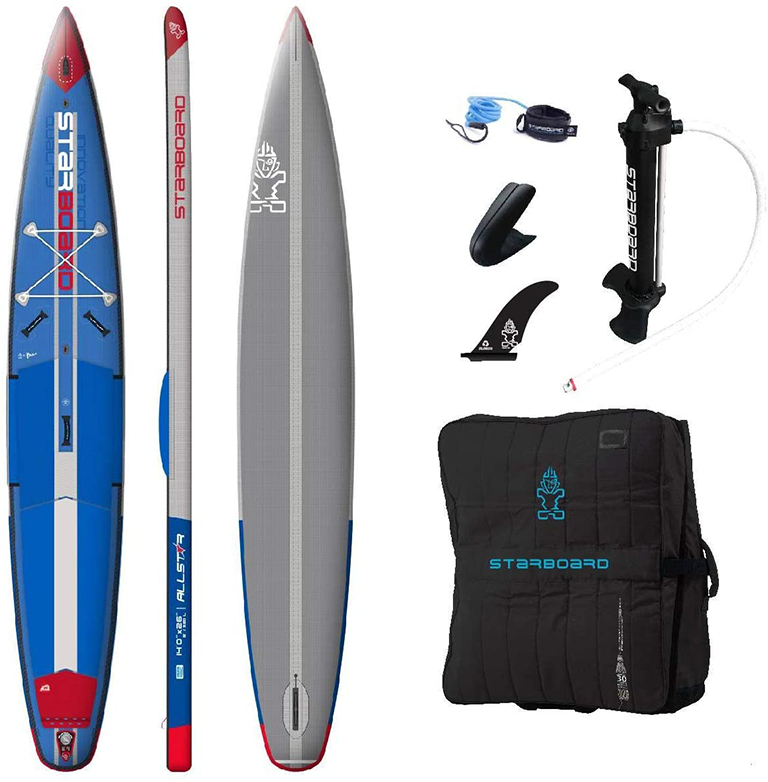 Well, it may not be magic, but the Starboard All Star Inflatable does as good as a job of this as one could expect. Like a few other iSUPs in their lineup, Starboard offers a variety of sizes for the All Star, each with slightly different characteristics. However, something that all of them have in common is that they mix the extreme long profile of a racing board with the light weight of an iSUP. Combined, these 2 characteristics can make a devastating go on the water if you have to race against one.

It’s no secret that hardboard SUPs generally provide superior performance to inflatables as they tend to be faster and more stable. On the other hand, the biggest draw of iSUPs is generally their convenience and light weight. But what if you could magically find a way to combine the 2 in 1 board?

While we don’t know of anyone who has put multiple racing-style iSUPs to the test with an All Star, let’s just say that we wouldn’t be surprised to hear that it comes out as one of the fastest on the market. This board isn’t build for comfort or stability — it’s made to get where you want to go faster than you want know you wanted to go there. 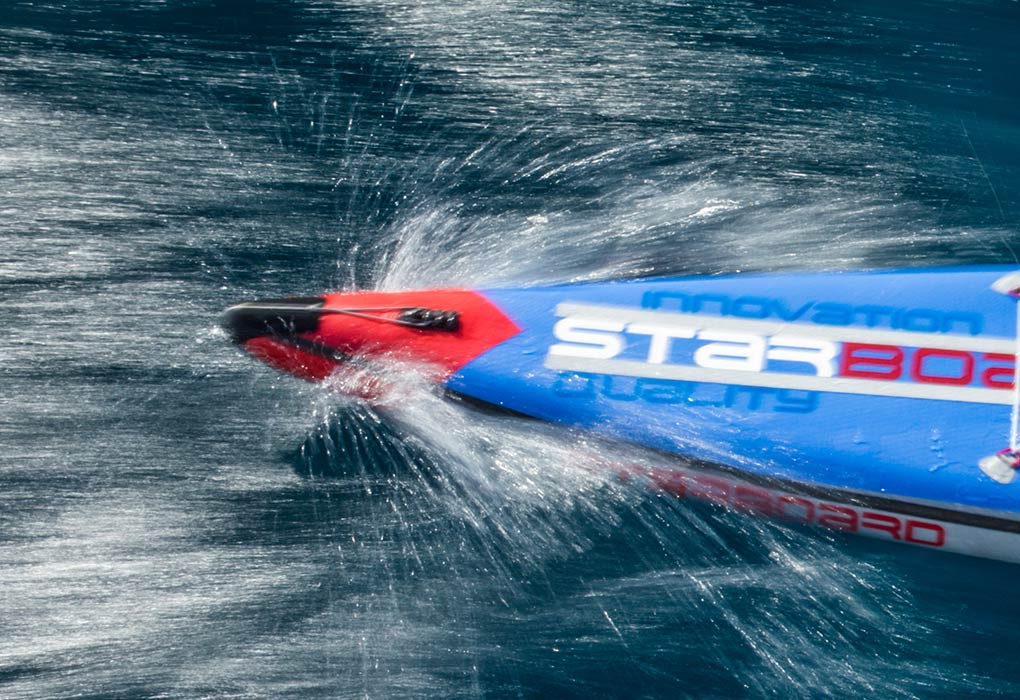 That’s why you have to forgive it in other areas where it may fall short. For instance, this is not what we would consider an especially stable board. After all, the thinnest (and fastest) version of this board is only 24” wide! All but the most experienced paddleboarders would find this board a challenge at times to stay upright.
Also, turning can be an issue with this board, especially when it gets up to speed. Again, this is a specialized board so it makes sense that it doesn’t have the same qualities as a touring or all-around SUP.
One area where it is lacking in particular is when dealing with waves. If you’re looking to surf with the Starboard All Star, consider a much shorter and wider board.

There’s a lot going on with this iSUP, so let’s start the more mundane features. There is a center carry handle as you would expect from just about any board, it this is really how you move it around on land. What’s different here is that this board also has 2 race handles, which are diagonal handles toward the front that help you to get a running start in the water. 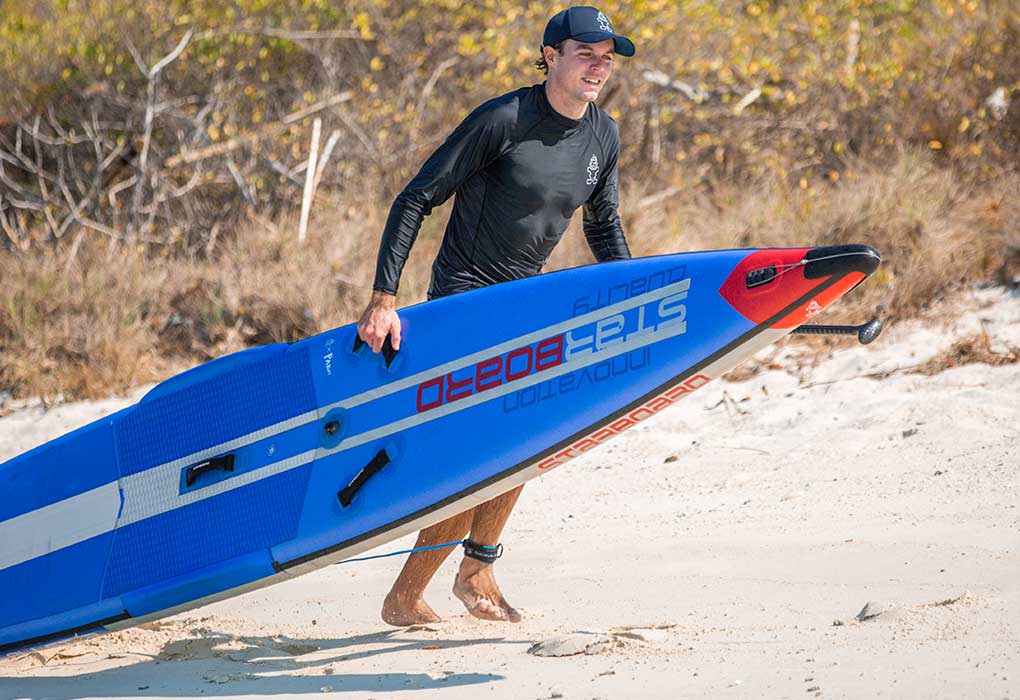 In addition, instead of just having a standard EVA pad for comfort, you can expect an EVA standing tray which includes a rail on either side that allows you to stand as wide as possible on this narrow deck without falling off.
A nose cone on the front allows you to have the one of the most useful parts of a hardboard on your inflatable — a perfectly shaped front for cutting into water. This is attached via an adjustable strong that gives you lets you choose the level of tension that will work best for you.
On deck you’ll find 2 FCS inserts that allow you to attach a GPS, compass, GoPro or other device. Lastly, a diamond grooved tail kick pad allows you to stay far back on the board and even have the front half out of the water without putting you in danger of falling backward.

Unlike other Starboard iSUPs, the All Star doesn’t offer much in the way of design choice, but they made sure to make sure that the design it does come with almost looks like something you’d see on a racecar. 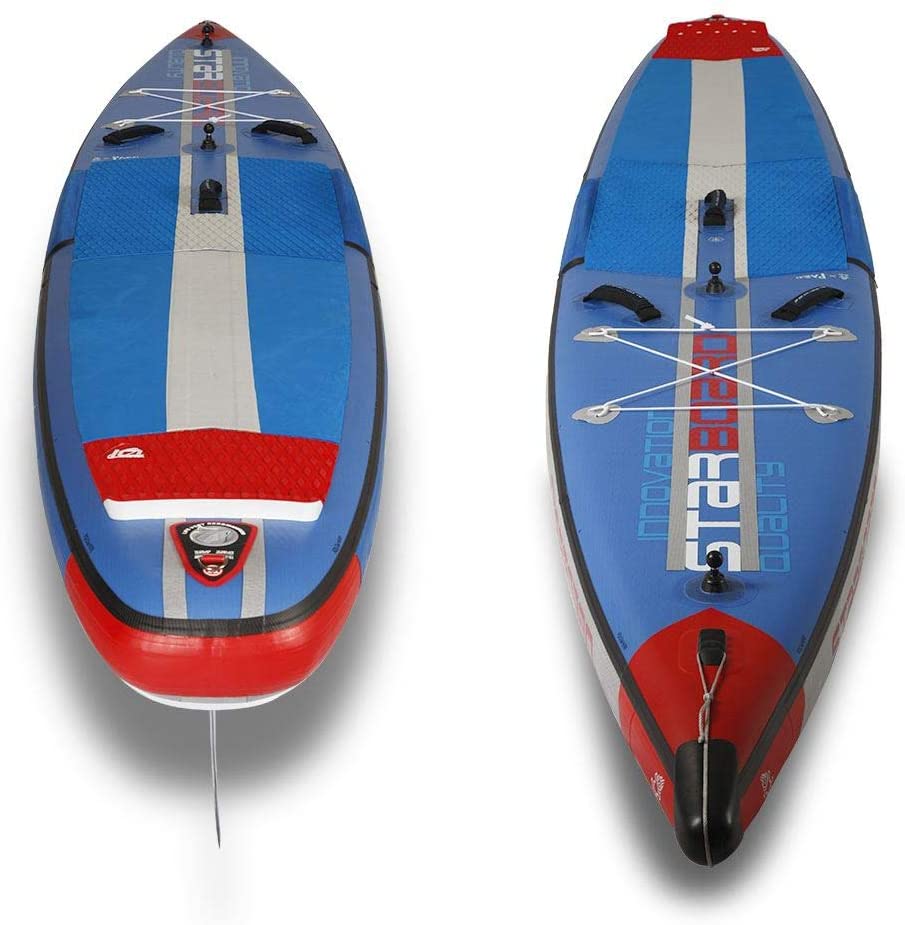 Oddly enough, there is a significant amount of storage on deck with a 4-point bungee area on the front-center. While storage area is always appreciated, it seems unneeded on this SUP since you would imagine that you wouldn’t be spending too much time on the water with this.
On the bottom, there is a single fin setup. Normally you would expect 3 fins on a board that prides itself on speed, but there just simply isn’t enough room. However, it comes with a 23” net positive fin which is one of the fastest center fins on the market and since it uses a standard US fin box, you could swap it out if you so choose.
To keep this iSUP as stiff as possible, Starboard included a twin string system that goes all the way around the board and is anchored in the fin box. Clearly a lot of thought was put into the design of this board to make it as worthy a possible in a race.

While Starboard generally give a choice of 1 of 4 construction options, the All Star only has one available — the Deluxe Single Chamber. Essentially, it’s a single chamber inflation area on the inside but reinforced rails that use a heat process on their seams versus the traditional glue in addition to drop stitching.

Due to the length of the board and the shape of the EVA standing tray, it ends up getting folded instead of rolled up like most other boards. Thankfully there are “Fold Here” marks to help to make that process easy.

Out of the box, you get a square-shaped backpack (since the board is folded), removable center fin, ankle leash and tiki air pump. As a side note, the air pump is made from recycled fishing nets and the newest version is 10% more efficient than the previous model. 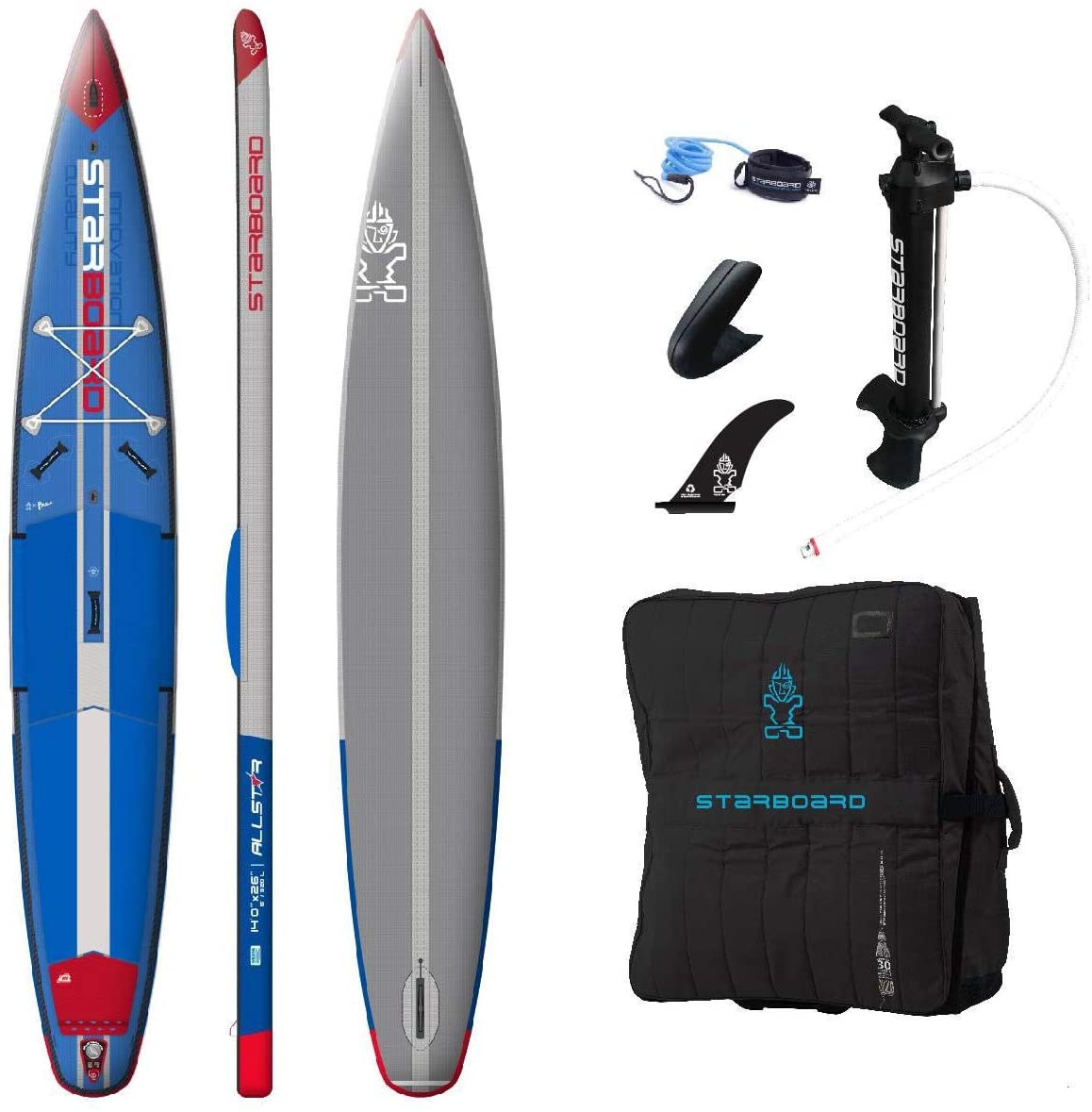 iSUPs used to be the most basic designs to be used for a backup. Nowadays, we have inflatables that are so well-designed and specialized that they rival all but the best hardboards on the market. Starboard did an excellent job is pushing the limits for how fast and streamlined an iSUP can be.
Should you get this board? Yes, but we have a few caveats. First of all, it’s very expensive. For about $500 less, you can get other racing iSUPS that while not as fast as this one, can still hold their own. Also, this board doesn’t include a paddle, so you’ll have to consider that in your purchase as well.
But if you have the cash and need to be the fastest kid out on the water, the Starboard All Star is one of the best boards in its class that money can buy.