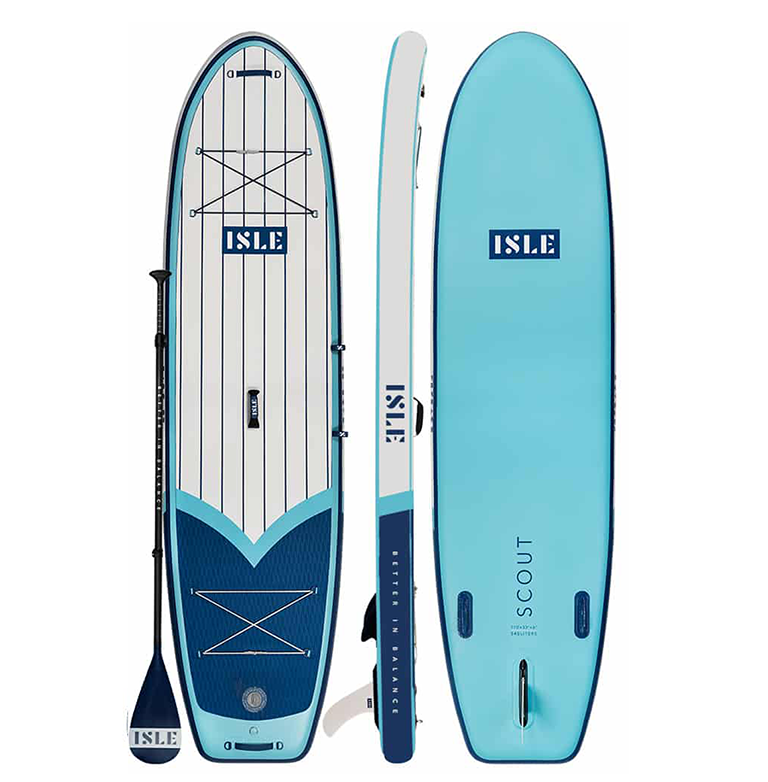 With this year’s Isle Scout, we have some mixed feelings. On the one hand, the 2021 was one of our favorite iSUPs for yoga — especially when you factor in the price. The 2022 model isn’t as ideal of a yoga board, but it is much more useful as an all-around iSUP.

With this year’s Isle Scout, we have some mixed feelings. On the one hand, the 2019 was one of our favorite iSUPs for yoga — especially when you factor in the price. The 2020 model isn’t as ideal of a yoga board, but it is much more useful as an all-around iSUP.

We loved the Isle Scout in years past, so how does the newest model stack up? Also, based on the fact that there are changes in the design of the board, how does that change the way you can use it?

With these sorts of iSUPs, we need to give a disclaimer before talking about their performance: this is not a performance board and is not designed for racing or anything of that sort. This is a board designed to be more of a means to an end. That being said, the changes this year do actually make for a better performing iSUP. 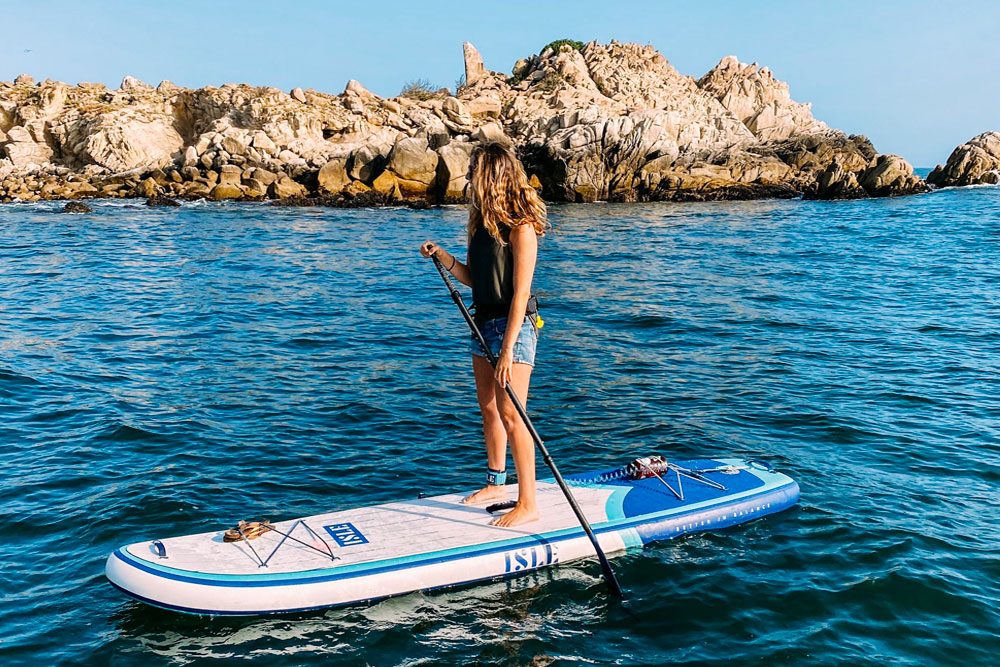 Now that it’s longer and has a 3-fin setup, there’s a noticeable improvement in speed and maneuverability. For our money, 11’ boards have the ideal length since they’re short enough to give you a decent turn while giving you a streamlined profile on calmer waters.

Stability is also a plus with this model since it is 33” wide. Not only is this useful for newer paddlers and those interested in SUP fitness, but it also works out great for bringing along a friend! Remember that if someone else is tagging along for the ride, you’ll lose a good deal of balance.

This is where you start to see some major changes in this year’s model. The first thing we noticed when we saw this board was the bungee storage area up toward the nose in addition to the storage in the rear that they previously had. Although we’re all for more storage space in general, this cuts down on a significant portion of the usable deck space. On the flip side of that, this storage space does have a low profile, so a smaller person can still sit on it without too much of a fuss.

One change we’re extremely happy about is the addition of a third grab handle on the back of the board. The front and middle handles are pretty standard and help to move the board in and out of the water while having a back handle gives you the ability to drag the board on the beach without damaging the fins. 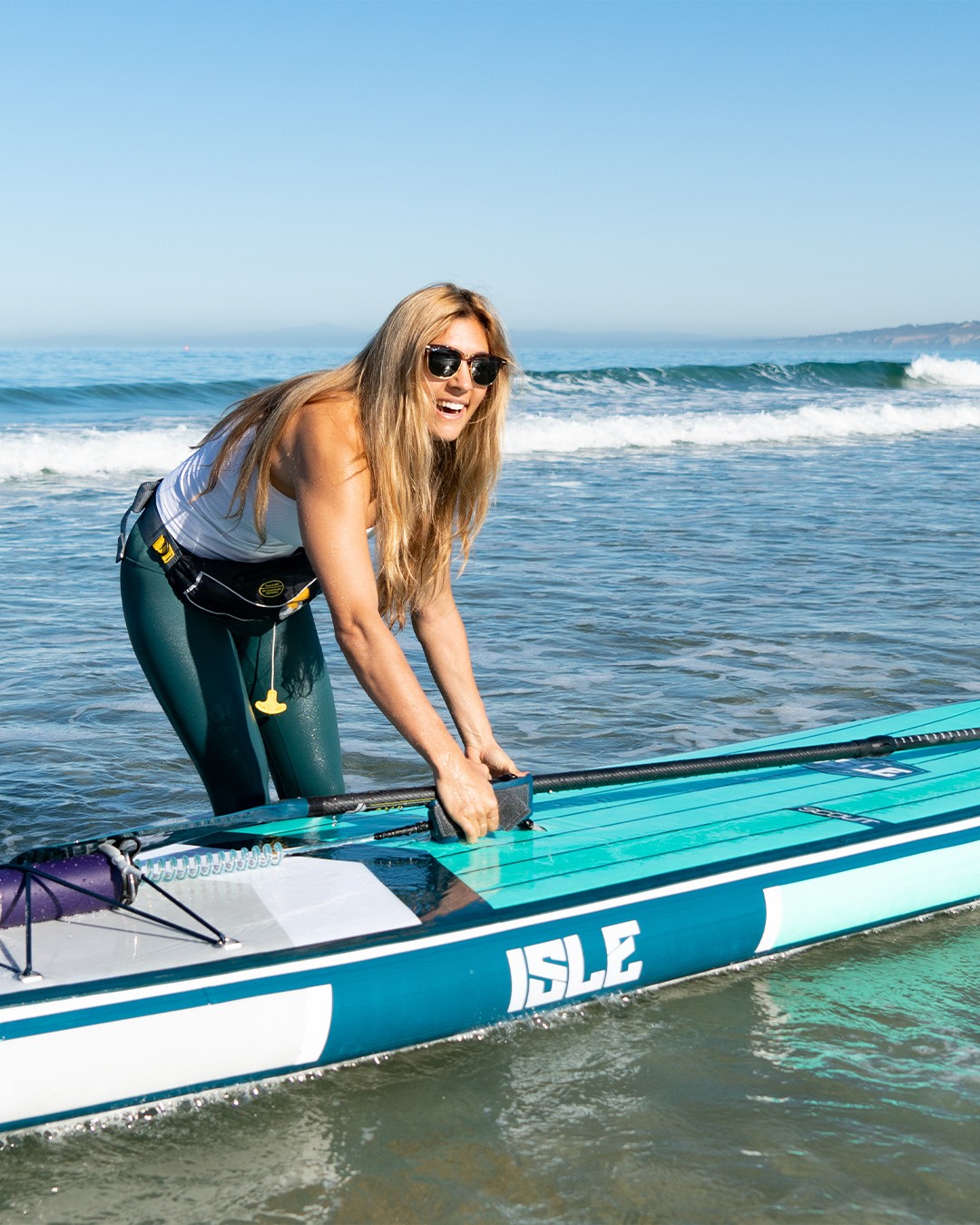 Since so many people use this board for SUP fitness, the deck is an extra important feature on this model. We’ve always enjoyed their extra cushy EVA foam bad, but this year they changed the texture on us. The main deck area has a grooved texture to give you enough traction to not fall off while still being able to change your footing easily. If you find yourself in choppy waters and need extra footing support, the rear of the board has a diamond texture that will give you and your gear maximum traction.

The last item that we’ll address is the paddle holder. We know it sounds like a minor thing, especially since you can just put your paddle in the bungees, but a dedicated paddle holder makes your life so much easier. 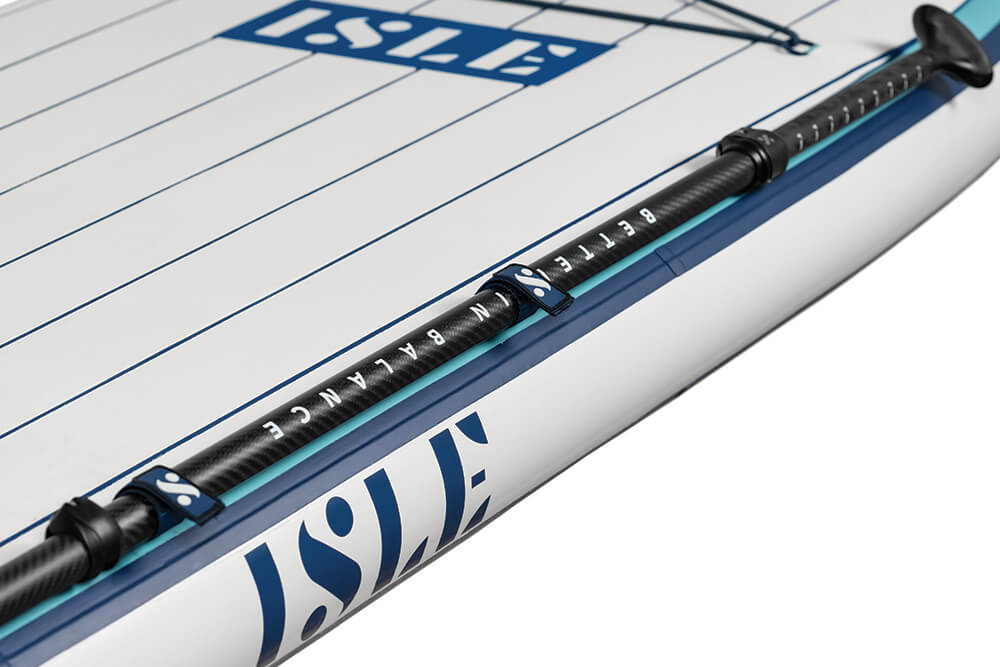 Particularly with a board used for SUP fitness, you can easily attach the paddle without it getting in the way. You should ever have to make a compromise between having a useful board or coming home with all your equipment.

At 11’” in length and a 33” width, the 2022 ISLE Scout is even better suited for passengers, yoga or other physical activities. The deck is 6” thick, which is exactly what we’d expect from a board in this class as it gives the perfect balance of stability without adding too much weight. 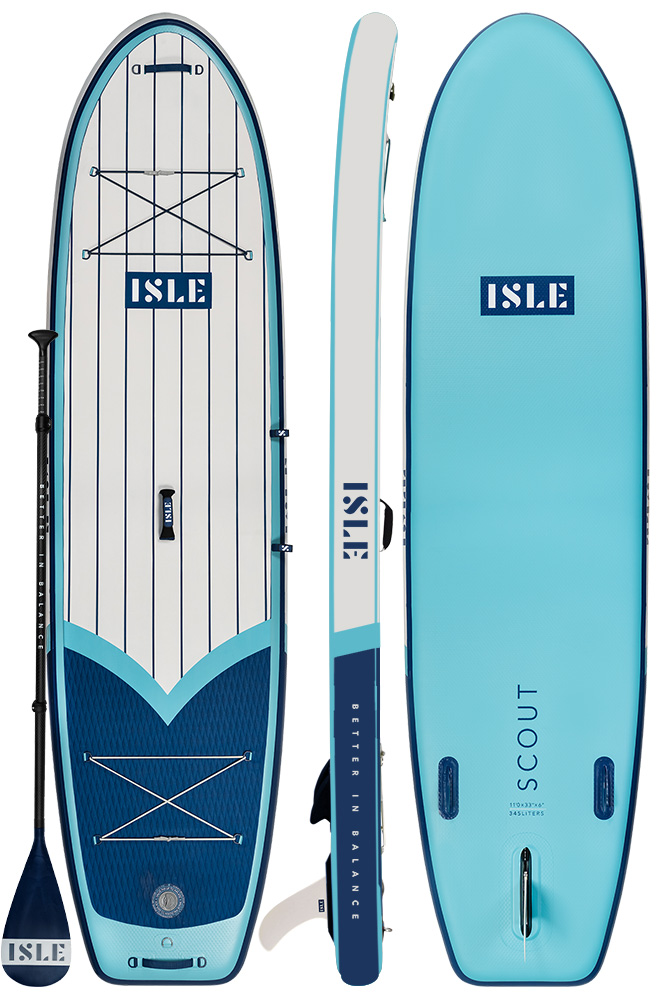 There are 14 D-rings attachments, as well, though the back ring is meant to be used for the included ankle leash or to attach to a dock. The trend in a lot of 2022 of models we’ve reviewed seems to be adding more attachment points, which is fine with us! An ingenious feature of the Scout is that it hides the D-rings so as to still have a smooth profile. You can find them in the bungee areas, and the front and back grab handles each has a D-ring on either side of them.

Something that surprised us this was how ISLE was able to keep the board at the same 21 pounds despite it being noticeably larger than the previous model. ISLE was able to do that using a process they call AirTech Fusion Lite. They only use 2 layers of military-grade PVC compared to the 3 or 4 of similar boards. That would normally be a red flag of the cutting corners, but what they did was use extra dense material so even though it’s only dual-layer, you could hit that sucker with a hammer and you wouldn’t have a problem. 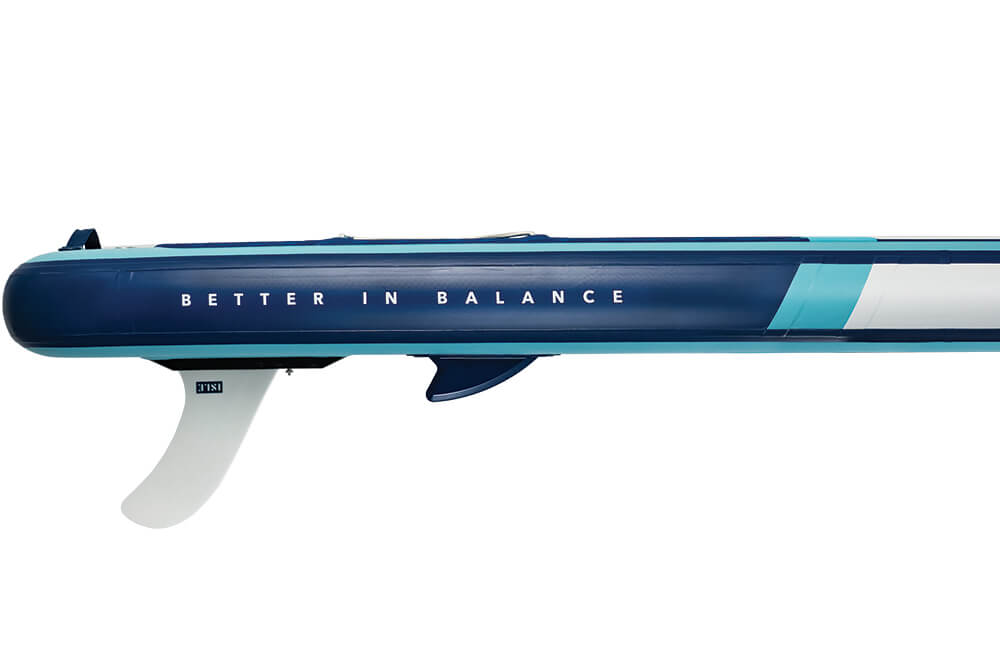 The bottom of the deck has a new 3-fin setup. They used a universal fin box for the center fin, which means that you’re free to swap out the included fin for a third-party one if you want to go paddling in a specific type of water. The side fins are fixed but still very small, so setup and packing shouldn’t be too much of an issue.

Once we change our expectations, we really came around the 2022 ISLE Scout. It was just a little jarring to us because we weren’t sure why they took away such a significant portion of the deck space since that was perhaps the signature feature of this board and why it was always so highly recommended for yoga and fitness routines. 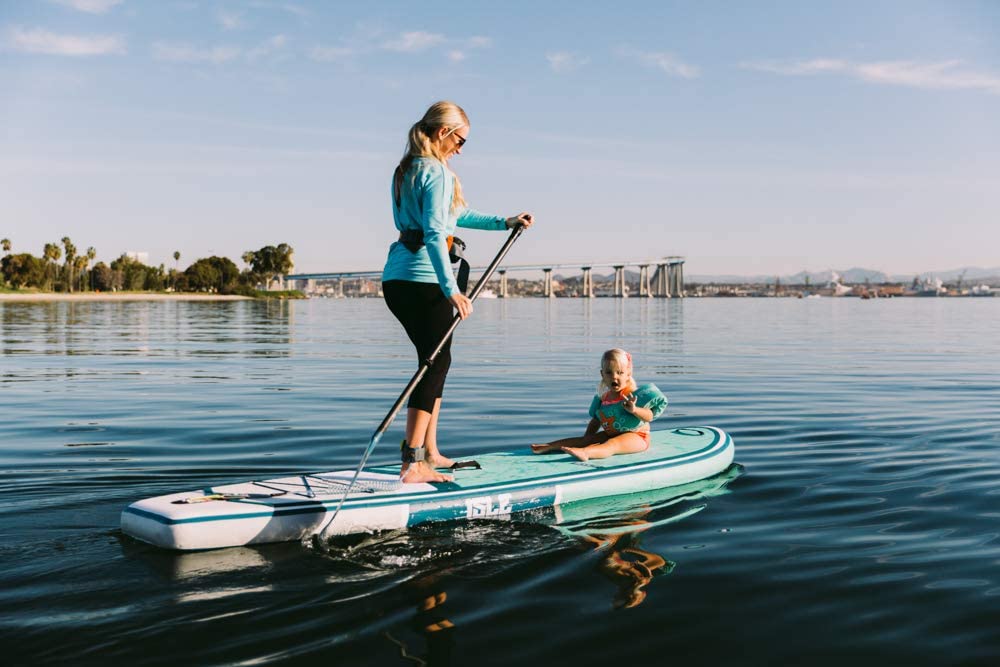 That being said, if you can get over that additional storage space upfront (too much of a good thing, we guess), then this will be an even better iSUPs than previous iterations. It’s faster and more stable, making it an exceptional all-around that can moonlight as a fitness board.