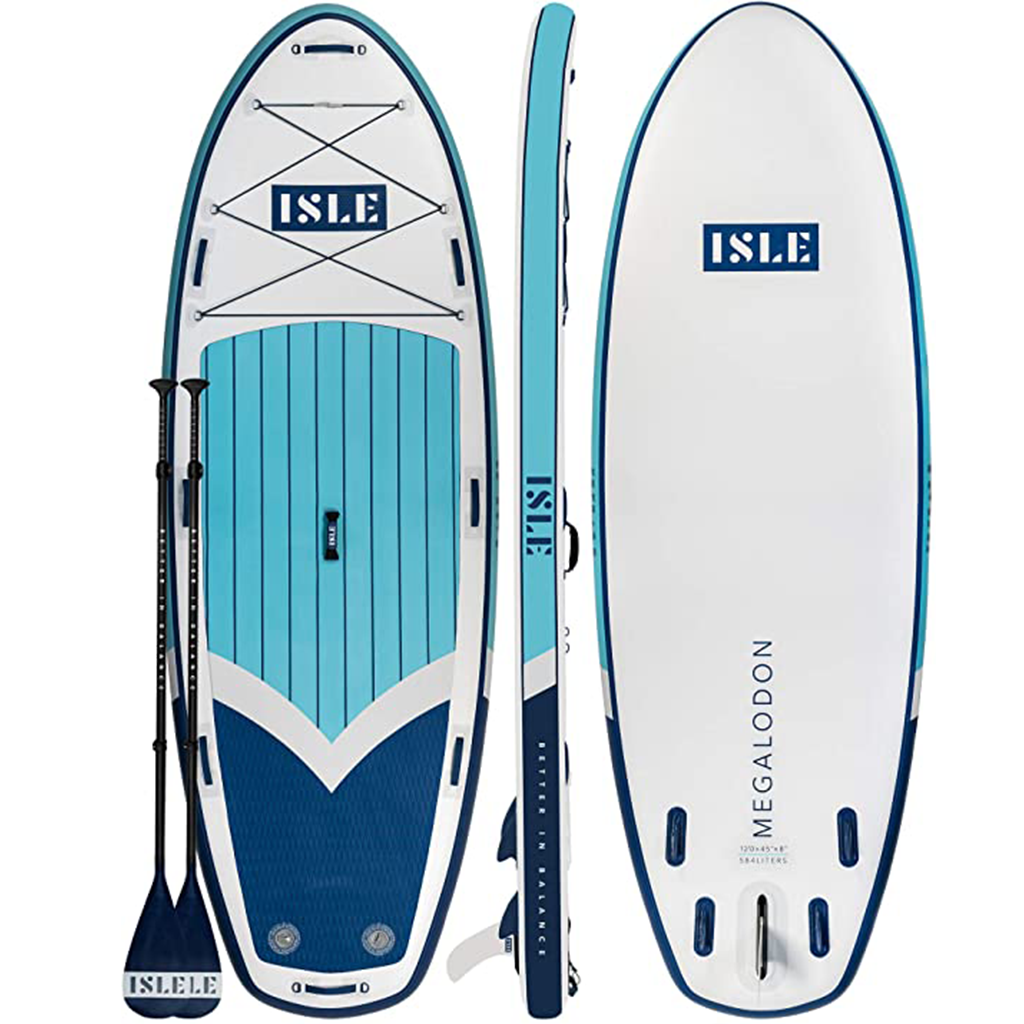 Just like the size of the board itself, everything about this board is like the other iSUPs in the ISLE line just…bigger and more. The ISLE Megalodon comes in 2 sizes: 12’ and 15’. For the sake of this review, we’ll just be focusing on the larger of the two.

If you saw a real megalodon in the water today (don’t worry — you can’t), it would be so big that it could swallow you whole. If you take one look at the ISLE Megalodon, you could say that it lives up to its name. This here is the Big Bertha of the iSUP world.
The ISLE brand started off with 2 college friends starting a surfboard company. When you look at a SUP like this, it lets you know that this company has really evolved over the years by listening to what their customers want, even if it seems a bit out there.
ISLE themselves call this a “novelty” board. Not because it’s just a joke that you would only want for the Instagram shot, but because it exists to give a good time without worrying too much about speed, maneuverability or the like. It’s designed for multiple people who plan to go out on calmer waters and just have a blast! 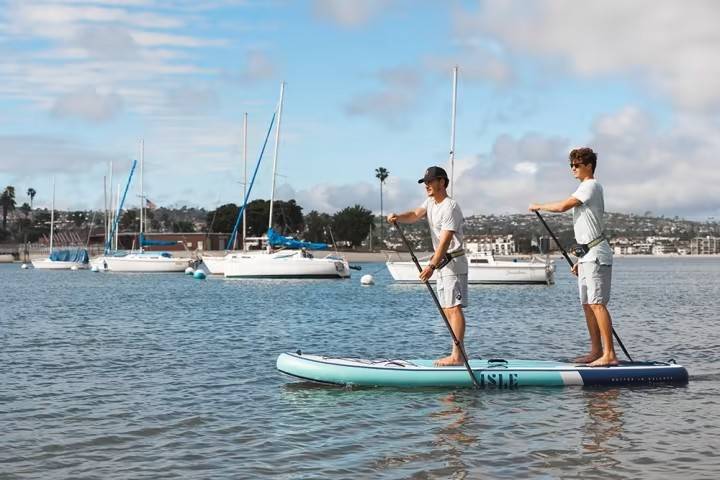 Right off the bat, you need to understand what to expect from this SUP. Think of it like a minivan that floats. With that in mind, this is a slow SUP because it’s so big and heavy. In fact, ISLE made sure to include 2 paddles since once this board is loaded up, it takes quite a bit of effort to get moving at a reasonable pace.

One this is for sure — the Megalodon is stable as all get-out. This is crucial since the board is able to support people and the last thing you’d want is a wobbly board with the whole neighborhood on top. With just a couple of people onboard, you can jump and dance without much movement.

A smart thing that ISLE was to make this board more maneuverable than we would have imagined at first. It’s not able to make turns like a smaller board, but for all it’s length and width, ISLE could have been forgiven for having a SUP that either drifts from side to side or that would be so hyper focused on moving forward that it took a team to turn. Thanks for this comes from the fin system that is unique to all other SUPs of this line and most companies in general.

The nose has a slight rocker which gives it some extra stability with choppy water. But with that being said, you wouldn’t want to take this on rapids or any substantial surf since it wouldn’t handle all that well. 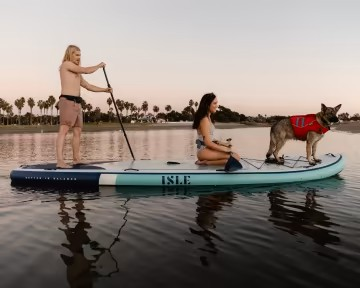 There’s a lot to love on this SUP, so let’s get the negative points out of the way. The Megalodon isn’t just a beast on the water — it’s a beast to setup. You can tell that ISLE is fully aware of this since this is the only iSUP in their lineup — and the only iSUP that comes to mind — that sports 2 high pressure valves for inflating and deflating. Out of the box, you get 2 air pumps since you’ll need a friend to fill up the board. Even with 2 people, you may find yourself inflating for the better part of 20 minutes.

Since the board is somewhat heavy definitely wide, while there is a standard rounded neoprene handle in the center, the board also has 6 handles on the side so that it can be carried casket-style into the water. Remember that the larger model weighs 50 pounds before any gear you may put on it, so a few extra hands couldn’t hurt! Also, there are handles both in the front and back for easy movement in and out of the water.

The grooved traction pad is made with a thick layer of brushed EVA to make sure that everyone stays on the boat and can be comfortable on it. Considering that this SUP is meant to take on passengers, the padded area takes up a larger portion of the deck than most other ISLE iSUPS, being somewhat comparable to the Scout in terms of percentage of usable deck space.

Lastly, another unique feature of this SUP is that it has 5 fins (4 fixed and one 2 removable) instead of the standard 1 or 3. While we’d love to say it has something to do with drag or some other engineering marvel, the truth is it has that many because of its size. In order to have any sort of tracking, you need to fill out the extra space underneath with fins. As a reference, the thinnest ISLE board is 31” wide and has 3 fins, so at 56”, the Megalodon has some catching up to do. 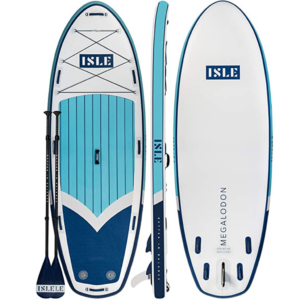 Despite having 2 size options, the ISLE Megalodon only one has one color scheme available which is a blue and lime green. At 8” thick, you have the ISLE Megalodon name featured prominently so no one will have any questions about what you’re riding!

The only storage space is up front toward the nose. There you’ll find a 6-point bungee storage area with 6 D-rings that can be used to connect a dry bag or SUP cooler. You probably won’t be taking this out all day like a touring board, but you might need space for a picnic with the family. That’s why we don’t look at a lack of storage in the back as an oversight — more just an understanding of the reality.

Something this iSUP lacks compared to its brothers is a rear D-ring for an ankle leash. Come to think of it, it doesn’t come with an ankle leash, either. ISLE doesn’t explain their reasoning behind this exclusion, though their thinking might be that since the board is so stable and that you generally would only take it on calmer waters, there isn’t as big a risk for falling off. If anything, it would have been pretty awesome to see multiple ankle leashes like they have multiple paddles. ISLE, if you’re reading this, that one’s free. We would honestly love to see that in a future edition.

Like all other ISLE iSUPS, the Megalodon is made constructed with a dual layer military-grade PVC material that is manufactured using their Airtech Fusion Lite process. This involves a standard drop-stitch process that adds a seal and bonding layer as the stitching is put in place. In doing so, they create an extra tough board this is lighter than many of their competitors’ boards of the same length.

Even though many other boards at this level have 3 or even 4 layers of material, there’s nothing to worry about here. The only danger this bad boy will succumb to would be something really sharp like a pointy rock or piece of metal at high speed. 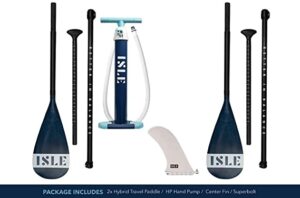 Full disclosure: the biggest letdown with this board is with the accessories — or should we say lack, thereof. One of the reasons we would recommend a brand like ISLE is because of the high-quality accessories that come right out the box, which is why this is a big letdown for any otherwise great board.

Out of the box you get 2 of their carbon fiber paddles that are both strong yet light. They have anti-lock technology to make sure that once you adjust the length of the shaft, you don’t have to worry about any twisting. Including 2 paddles was a smart move since this is probably going to have more than one person on at any given time.

Besides the nylon center fin, the only other accessories are 2 dual action hand pumps — one for each valve on the back on the SUP. They’re good quality for what they are, but even with 2 people pumping, it’s going to take a while to inflate.

If you’re so inclined, there are a number of additional accessories that can be purchased for the board. For instance, you can purchase a rolling travel bag to lug around this beast without too much trouble. Also, the 15L ISLE dry bag that was made specially for this board is an option.

If inflating this iSUP seems too daunting to you, you have the option to purchase either a 12v electric pump that plugs into your car’s cigarette charger or a version that uses a chargeable battery. If you’re not in for a workout, this is highly recommended.

If you’re looking to add the ISLE Scout to your arsenal, there are two ways to do that online. You can either going through their own page[i] or through Amazon[ii]. As of now, is no difference in price between the two options, but ISLE give you the option to pay in installments through Affirm

If you’re looking to haul around a ton of people or you just have something you want to prove to the other paddlerboarders on the lake, the Megalodon might just be iSUP you’ve been waiting for. This is about as big a board as you can get without outright buying a boat. 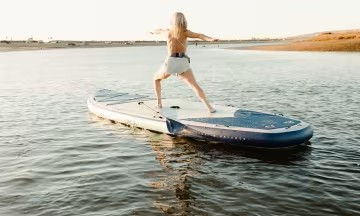 While the board itself is well designed and fun to use, we’re a bit disappointed with what the board lacks. First of all, there is no reason that a board of this size (and price) only comes with single chamber pumps. At the very least, they should have upgraded to dual chamber pumps or electric ones. In addition, there is no ankle leash, repair kit or even a carrying case without having to pay extra. Again, this is by far the most expensive iSUP that ISLE produces, yet to have the accessories that come standard with their other board, you have to shell out a few $200-300 more. That puts a bad taste in our mouths which is a shame because the board itself is so great.

In the end, obviously one of the most important decisions you’d have to make if you are thinking about an ISLE Megalodon is which size you prefer. While both are…well…big, take second to think about it since not only is there a big difference in price, the larger of the 2 is a whole lot more work to set up and transport. Either way, make sure you’re not getting too much or too little board for your needs.

CLICK HERE TO GET YOUR VERY OWN ISLE MEGALODON 12’/15’