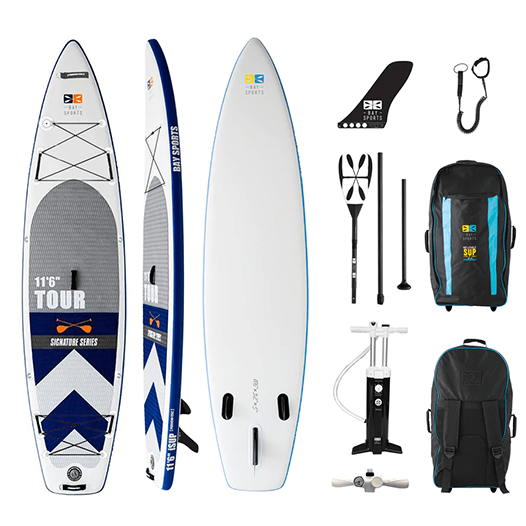 This a board of enigmas. It’s extra long but extra light. It’s made from PVC but looks like wood. It’s relatively skinny but holds up to 400 pounds. That’s not to say that this doesn’t come at a high price. The Bay Sports 2022 11’6” Tour Paddleboard is a premium that gives life to the idea that you get what you pay for.

Honestly, at first glance, it looks very unassuming and like there isn’t much to it. But when you get into the board itself, you see that this long boy has a lot to love.

When you think of Australians, what pops into your head? For a lot of us, the first thing (after Crocodile Dundee) would be friendly people enjoying a day at the beach either swimming or surfing. That’s why it makes total sense that one of the best-selling iSUPs from the land down under doesn’t looking like an iSUP at all — more like a surfboard from the 60’s.

While this isn’t a racing board, man is it fast! This is because of the long narrow shape and three fin setup that give you enough stability but still lets you move in the water without too much drag. It’s not a racing board, though sometimes you might forget that.

Considering that this board is narrow relative to its length, this is a remarkably stable board. This is especially important if this is going to be ocean SUPing. This feature may be helpful for beginners on calmer waters but it is best put to use by a more experienced paddleboarder in choppier ones.

On the front of the deck towards the nose, there are 4 D-ring attachments that include a modest bungee storage area. What’s interesting about the back of the board is that besides having a D-ring for an ankle leash, they have a reinforced grab handle. The reason this is of note is that most SUPs have 1 or 2 of these grab handles, but if they only have one, it’s almost always on the front. In all honesty, having a grab handle on the back is the most logical since dragging the SUP this way protects the fins, but we would have expected a second up front.

The deck is about ¾ covered with their EVA foam diamond-grooved traction pad, which is standard for Bay Sports iSUPs. However, since this is such a long board, ¾ means a lot of space, especially if you plane to take a friend along.

Since this is more of a touring board, you in addition to being just a teeny bit wider than others board for the length, the nose is v-shaped, helping you cut through the water. While this is often seen in racing boards, since a you would assume that someone on a touring board is going to on the water for hours or even days, it’s important that each paddle stroke will count and the that the board can move quickly or else there will be a lot of wasted energy on the part of the paddler. 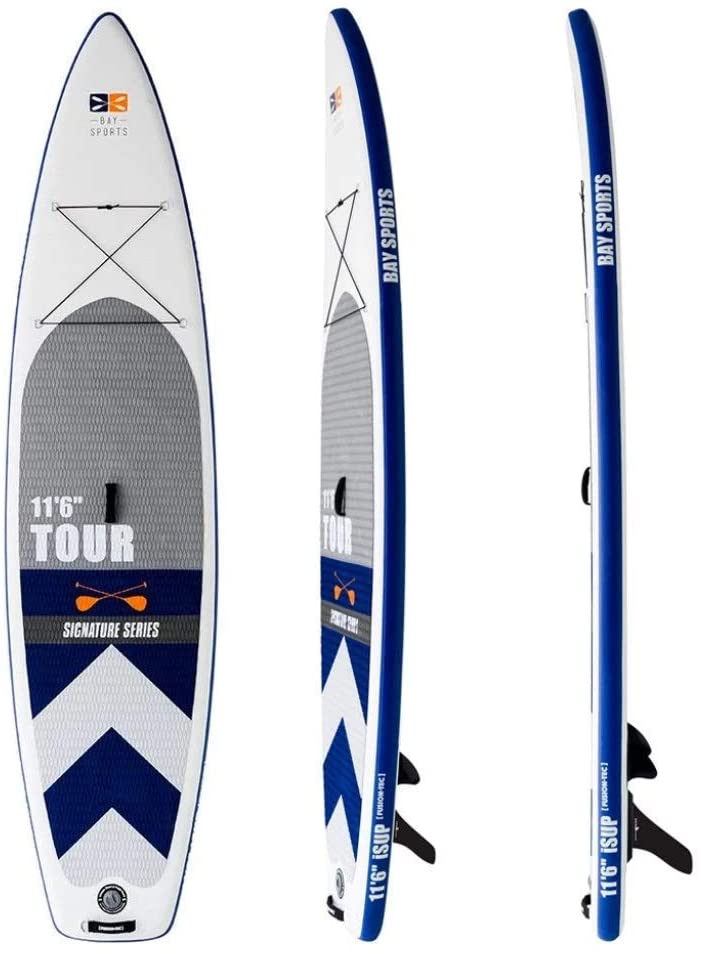 Speaking of touring, toward the nose there is a storage area that’s standard on most boards of this brand: a 4-point bungee area with D-rings on each point for tying down extra gear. We’re not all that happy about this being the only storage space since this is a touring board. In general, these are types of boards that people take out all day or even multiple days, so having a more space and attachment points for gear are usually a given. There’s 1 additional D-ring attached to the grab handle in the back for use with the included ankle leash

Underneath, we see a 3-fin thruster setup to help to provide as much speed as possible as the side fins cut down the drag from the large center fin.

Let’s talk about weight for a sec. As big as this board is, it only weighs 17.4 pounds! That’s especially impressive when you realize that this SUP is made from triple-layer military-grade PVC material. We’ve seen smaller boards with 2 layers that weight almost 10 pounds more. The reason comes down to quality materials and engineering that makes the most of every square inch of the SUP to make it tough and resilient without having to pack on the pounds.

One of our biggest concerns with a board this big is the setup. Remember: you have 11’6” to inflate up to 16 PSI. However, since they included what is basically one of the absolute best air pumps around, you can be on the water fast than other smaller boards with cheapo pumps.

One last thing to mention about the setup. The center fin uses a US fin box which uses a screw to hold the fin in place. Most other similar boards offer a snap-in-place connection, which might make this seem like an oversight on the part of Bay Sport, but that’s actually the opposite of the truth. This a board for serious paddleboarders who may want to swap out that center fin for another since there are no shortage of third-party fins for various purposes and — you guessed it — these after-market fins use a US fin box configuration to connect the boards.

The accessories are also noteworthy because at first glance, they may seem mundane, but they are actually of top quality. These include backpack, ankle leash, 3-piece fiberglass paddle, heavy-duty Helios dual-chamber triple-action air pump and gauge. This goes along with the theme of having a premium board without announcing it to the world, and we can respect that. 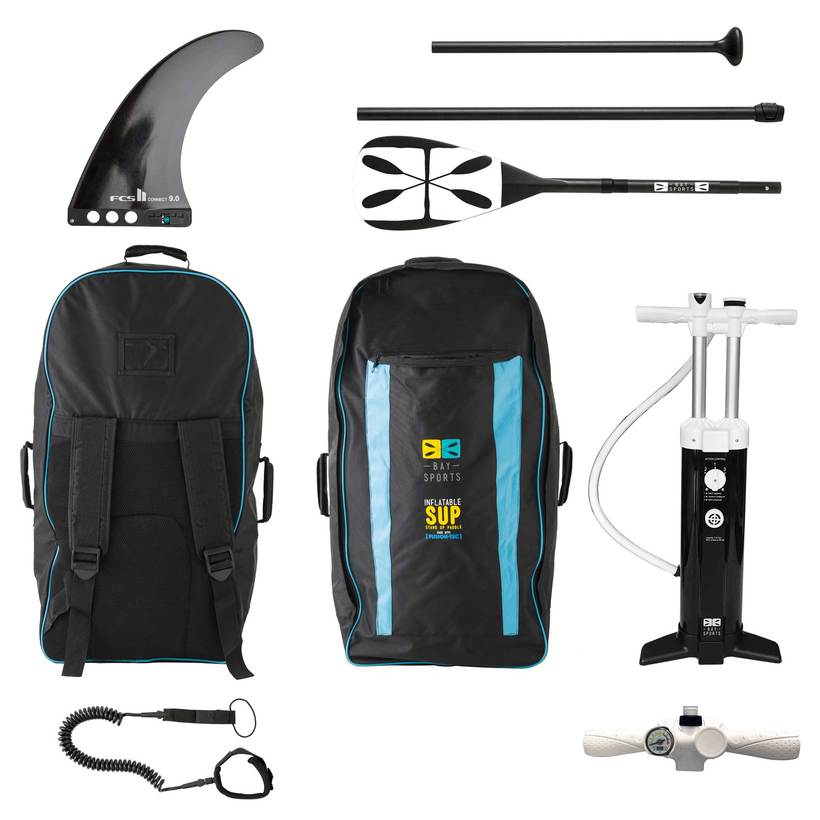 Without a doubt, this is one of the best iSUPs out there on the market. That being said, it’s also one of the most expensive. We feel that beginners would absolutely benefit from the features and performance of this board but that it would money better spent on an experienced paddler so that they could really take advantage of everything the Tour has to offer.

This isn’t all to say that this is perfect SUP. For instance, for most manufactures, a SUP with these specs would normally have more storage space since you could easily take this on the water for hours or even days. It seems a waste to have a 400-pound weight capacity and not be able to bring much gear with you. However, a lot of that could be taken as Bay Sports had more of a surfing audience in mind who would use the strength of the board for rough waters instead of taking a loved one out for a picnic on the middle of a lake.

Overall, if you’re tired by the limitations of your current iSUP and have the cash, the Bay Sports  11’6” Tour Paddleboard is definitely worth checking out. Its low-profile quality makes it a standout in a crowded market.

CLICK HERE TO GET YOUR VERY OWN BAY SPORTS 11’6”